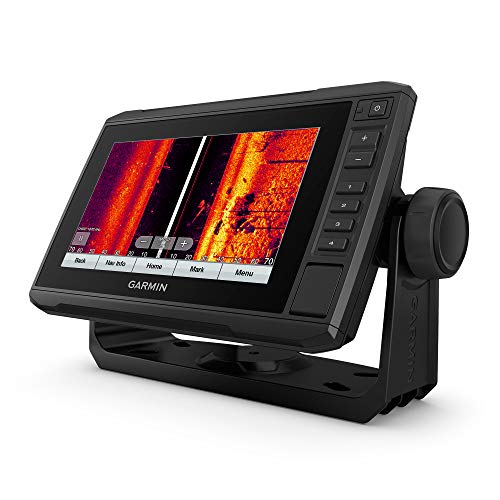 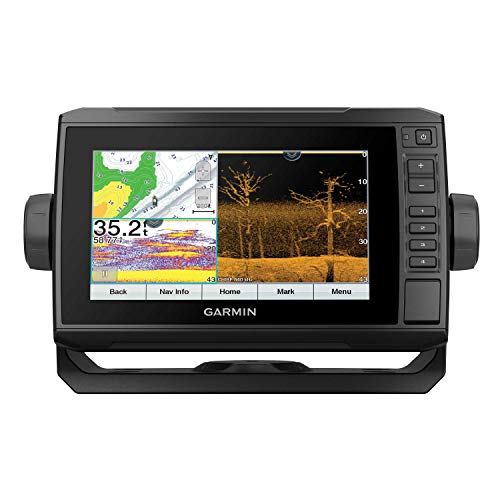 Garmin ECHOMAP UHD Series Features Garmin ECHOMAP UHD Series Features ECHOMAP UHD Series – Comes in 3 screen sizes, features Ultra High-Definition scanning sonar capabilities, is preloaded with Garmin BlueChart g3 or LakeVü g3 inland maps, and has built-in Wi-Fi® for access to the Garmin Active Captain marine app for updates and chart upgrades. The 7″ & 9″ units support UHD SideVü, Panoptix LiveScope, and Garmin’s new Force trolling motor. Clear Screen and Sunlight Friendly – This is one of the first things you will pick up on with the ECHOMAP UHD 73sv. The screen is pretty bright and the viewing angle is good even in direct sun. Keyed assist touchscreen –

The 7″ screen uses touchscreen navigation along with a keypad with 4 quick access shortcut keys to assign the active screen when held. The Shortcut button can then open the assigned screen when pressed. Built-in GPS – The 5hz GPS receiver acquires satellites quickly on startup and shows exact location pretty quick. Network Capabilities – Easily share sonar data, waypoints, routes, and supplemental charts with other 7″ or 9″ ECHOMAP UHD or ECHOMAP Ultra units. NMEA 2000 | 0183 – Connect the UHD to an autopilot, digital switching, weather, FUSION-Link audio system, media, VHF, AIS from one screen. Garmin ECHOMAP UHD 73sv – Power Connections ECHOMAP UHD 73sv | Power Connections TouchScreen navigation menu – Setting up the ECHOMAP UHD 73sv for how you fish or cruise is simple and adding custom screens and settings is pretty straightforward without having to do a deep dive into the manual.

Since this continuous sweep of frequencies provides a much wider range of information, CHIRP sonar can create a very clear, high-resolution image. As you can see above Garmin HomePort™ and review it later. I find it pretty valuable to be able to look over the recording from the day and mark any spots that I what to check out in more detail. As I play it back, I can stop and drop a GPS mark on something interesting and upload it to the GPS to take a look at the next time I’m on the water. See the image above. To Start Recording – Insert a memory card into the card slot. From a sonar view, select MENU > Record Sonar. Garmin says 15 minutes of sonar recording uses approximately 200 MB of space of the inserted memory card but I recorded several hours and only had a 980Mb file. An individual recording automatically ends after it reaches 4 GB in size. You can record sonar data until the card reaches capacity.

Note: Before you can playback the sonar recordings, you must download and install the Garmin The scroll speed will affect how you will have recorded. For example, if the GPS is set to a slower scroll speed in the sonar menu, the window of time the unit can rewind will be greater. If the device is set to its fastest scroll speed, you will see a smaller window of time within the sonar rewind. If you see something good that you just marked, rewind the history, tap the screen and drop a waypoint on it to save it. from side to side, producing “slices” that are combined to create very detailed images. Fish are easily identifiable on Traditional View with CHIRP whereas Structures are well defined using ClearVü. For fishermen and divers looking for structures like wrecks, reefs, log piles and other underwater natural and man-made features, ClearVü is a great tool. out to the side, producing “slices” that create very detailed images. You see a crystal clear image that makes it easy to identify wrecks, structures, rocks, and even fish that are stacked up next to or above them.

The distance you can scan out to the side depends on the depth but can be usable out several hundred feet which is excellent for covering and searching lots of areas quickly. Ultra High-Definition ClearVü – Transmits brilliant image clarity of structure and fish below the boat at greater depths than other high-frequency scanning sonars by utilizing a downward-facing element to put more power on targets.

Ultra High-Definition SideVü – Stunningly clear images of structure and fish out to the sides of the boat. This makes searching new areas easier and faster because you can see everything the first time with excellent detail. Keep in mind though that these sonar images are under perfect conditions and tuning. Garmin Echomap 73Sv Black Friday Deals 2022 We rarely get returns back quite this perfect in everyday fishing, but they are pretty damn good.

Can Am Ryker Black Friday Deals 2022